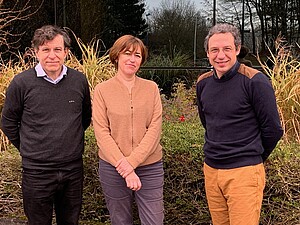 Calcium is essential for the body, especially during growth. If too little is present, a child will suffer from rickets, but overproduction – or hypercalcaemia – can lead to serious problems, including kidney failure.

“The idea of this treatment was born from a discussion with Prof. Linglart, who told us about the lack of satisfactory treatments“, remembers Daniel Metzger, director of the Rôles physiopathologiques des voies de signalisation des récepteurs nucléaires team (Physiopathological Roles of Nuclear Receptor Signalling Pathways) at the IGBMC, who explains that patients suffering from hypercalcaemia currently require heavy treatment. “This can cause serious side-effects in the liver and kidneys, and has a significant impact on a child’s bone development.”

In the case of hypercalcaemia, on which the researchers worked, it is a vitamin overproduction that leads to excessive levels of blood calcium. “Vitamin D normally attaches itself to nuclear receptors that cause gene expression and trigger calcium absorption. It was this interaction that we decided to target”, explains Gilles Laverny, who is co-leading the study.

A key in a lock

“We have been studying these nuclear receptors, which are proteins involved in the regulation of a large number of functions, for many years. The expertise we have gained enables us to treat the cause of hypercalcaemia directly, which other treatments do not do”, adds the researcher.

Daniel Metzger compares the interaction of vitamin D with its receptor to that of a key in a lock. By preventing the key from entry through the introduction of a molecule developed for that purpose, the researchers can prevent the chain reaction that leads to hypercalcaemia.

The results of their work were published in the journal Nature Communications and open up promising prospects for therapy. After successful tests in vivo, the researchers are preparing to move onto the preclinical phase, in order to continue their assessment of the efficacy of the treatment.