Discovery of a mechanism to regulate contact sites between organelles 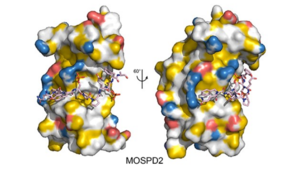 “Organelles are subunits of cells that carry out specialised functions. For example, mitochondria and lipid droplets are responsible respectively for the production and storage of the cell’s energy…” says Fabien Alpy, a researcher at the IGBMC, who is more specifically interested in the locations where two distinct organelles are in physical contact, which enables exchanges of material and information.

“The question we asked in the paper published in The EMBO Journal was as follows: by what mechanisms is the process of the formation of these contacts regulated?” In other words, why do organelles become attached at a specific time, in a specific location?

“Contrary to the idea that prevailed until fifteen years ago, the researchers noticed that these contacts were frequent and did not occur randomly: they are organised by proteins.” These proteins form molecular bridges that attach the membranes of the organelles to each other.

In the articles published in collaboration with teams from the IGBMC, Nice and London, the researchers show that certain proteins that form the molecular bridges between the organelles display a modification on their surface called phosphorylation. “When the phosphate is added to the surface of proteins, contact is established.”

Lipids are insoluble molecules that do not move easily in the cytoplasm. In the context of a contact involved in the transportation of cholesterol, this mechanism of phosphorylation makes transportation on demand possible. However, some grey areas still remain: “We don’t know how the phosphorylations are added or removed, and what signals this molecular mechanism responds to.” To be continued.