When translation and transcription go hand in hand 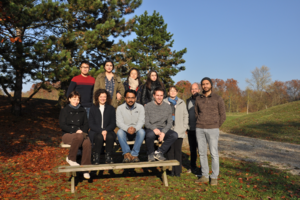 One of the most fundamental processes of every living organism is the expression of its genetic information. This occurs in two stages that for a long time were thought to be independent. The first is transcription, in which the RNA polymerase copies DNA into RNA. In the second stage, the RNA is translated into protein by another enzyme called ribosome.

In the mid-1960s, researchers hypothesised that certain species (in particular bacteria) were capable of physically combining the two processes so that they occurred simultaneously. Until recently, this theory had never been tested.

The researchers from the Institut de Génétique et de Biologie Moléculaire et Cellulaire (IGBMC) succeeded in viewing this process in atomic resolution for the first time. Thanks to cryo-electron microscopy (Cryo-EM), Albert Weixlbaumer’s team was able to observe the entire gene expression process at the molecular level and to confirm the hypothesis that transcription and translation can occur at the same time.

The team published a paper in Science on 11 September 2020. Several scientific journals, such as the member magazine of the American Society for Biochemistry and Molecular Biology and Chemical & Engineering News have already quoted the Strasbourg paper, emphasising its importance in this field of research.