After spending nearly three months in Luxor, Egypt, Frédéric Colin and his team from the Archéologie et histoire ancienne : Méditerranée – Europe (Archimède) joint research unit returned home from their mission on 20 December having discovered three new sarcophagi. Let us look back at this incredible adventure in collaboration with the French Institute for Eastern Archaeology that began in 2017 in the heart of one of the most intensively studied sites in the world. 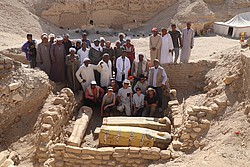 The team at the time of the discovery of three new sarcophagi.
©Université de Strasbourg/Ifao, E.Hagag

“For years we dug in the desert alone (see photo). You just needed to bend over to discover something new”, recounts Frédéric Colin, who in 2016 decided to set up a new scientific project in the heart of one of the richest sites of ancient Egypt: the Theban Necropolis, opposite Luxor. “We were now in an anthill of researchers and we had to find something new.” The archaeologist then used existing research to target the interior of an 80 x 100 metre area that contained a mortuary temple. On the site was a gigantic 22-room, 3-floor tomb that had been known about since the 18th century and studied from the 19th by two Egyptologists from Strasbourg*. Around it, the terrain, which was covered in rubble, was hardly appealing. It was difficult to dig in and appeared in white on the maps “as if there was nothing there. In fact, it was a funeral valley, in the other zones the tombs touched each other, there were no gaps,” continues the researcher. In 2017, a geophysical survey was conducted in this area in partnership with the Strasbourg Institute of Earth Physics (IPGS). It made it possible to discover some interesting anomalies.

2018, a stele and two sarcophagi found in a hole dug by a dog

The following year, Frédéric Colin went to the site with a small team. For three weeks, from 6 a.m. to 1 p.m., they searched the ground by hand, layer by layer, under the gaze of a pack of stray dogs. One morning, when they arrived on site, in a hole dug by a dog during the night, they spotted a stele decorated with hieroglyphs, behind which the researchers discovered two sarcophagi from the 18th dynasty, dating from the 16th or 15th century BCE, over 3,500 years ago.

In 2019, the digs continued in this area of the site with around 30 Egyptian workers. “There was a little suspense, but our hopes were fulfilled”, rejoiced Frédéric Colin who, after one and a half months, discovered three new sarcophagi in an exceptional state of preservation. “Given the quality of the objects, they must have been close to people in power. We are approaching a discovery comparable to those of the 1920s and 30s. We have enough evidence to believe that a big cemetery transportation operation took place in the 15th century BC.” Following the construction of the mortuary temple of Thutmose III, the sarcophagi were placed in a system of low walls designed to level the ground and protect them. “There are probably many tombs but the challenge will be to figure out how to get to them.” 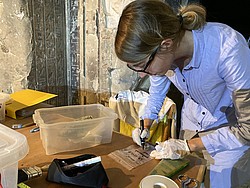 As we await the next excavation season in October 2020, the objects of high heritage value have been safely stored in a shop at the Department of Antiquities in Luxor. By modelling each phase of excavation, the researchers can pursue their investigations in France. This method has also earned Frédéric Colin a USIAS Fellowship. “The work has only just begun. The core of the research is not only done in the field with the wind in our hair, it’s also the enormous task of processing and interpreting the scientific data to prepare for publication”, concludes the researcher, adding that: “The ten weeks of excavation in 2019 yielded 868 Go of digital data…”

Images of the discovery

From the periphery to the centre

Since 1999, the University had been conducting excavations led by Frédéric Colin in the Egyptian Sahara desert. In 2014, a few days after the archaeologists’ departure, two terrorist attacks took place near the site. In 2015, the terrorist attacks in Paris marked the end of the mission. “Rather than wait for an improvement in international relations”, Frédéric Colin decided to find another playing field and moved from a deserted oasis on the fringes of civilisation to one of the capitals of ancient Egypt where the riches of the ancient world were concentrated. “We became gentrified by necessity”, jokes Frédéric Colin, who swapped a tent for hotels and the history of the periphery of the Pharaonic world for that of its centre.