Richard Schrock: a new researcher, 2005 Nobel Prize in Chemistry, welcomed at the University of Strasbourg at the end of 2019

The University of Strasbourg will welcome a new eminent researcher from the autumn of 2019: Richard Schrock, catalysis specialist, winner of the 2005 Nobel Prize in Chemistry. His arrival obtained the financial support of the Eurométropole of Strasbourg and the Greater East Region. 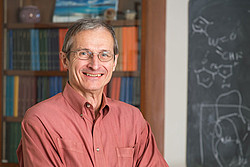 A fifth Nobel Prize will be awarded at the University of Strasbourg on 1 October 2019: Chairperson Michel Deneken announced, on the occasion of the Board of Directors meeting on Tuesday 2 July 2019, that Professor Richard Schrock will join the Institute of supramolecular science and engineering (Isis - UMR 7006 CNRS-University of Strasbourg) as a chaired professor.

Within Isis, Professor Richard Schrock will carry out work with Professor Amir Hoveyda, laureate of MOPGA, who created the catalytic chemical synthesis laboratory at ISIS in early 2019. They will work on the design and development of catalysts capable of generating stereoselective tetrasubstituted olefins. This is a very important but also very challenging area of research, probably the last step in the catalytic methachesis of olefins, the chemical reaction for which Richard Schrock was awarded the Nobel Prize in 2005.

His research activity is at the same time extremely fundamental but also applied: with Professor Hoveyda, they created a spin-off with a head office in Zurich and production near Budapest. In the autumn of 2019, Professor Schrock wishes to finance two postdoctoral researchers to conduct his research activities on the premises of the ISIS extension next to Professor Hoveyda. The field of catalytic chemical synthesis is at the centre of advances in almost all areas of chemistry and biology research. It gives access in particular to biologically active natural products or compounds designed to be used as medicines. The same goes for molecules that could be involved in solving agrochemical problems.

Richard R. Schrock was the first doctoral student at Harvard University in 1971 under Professor John Osborn (who later became professor of chemistry at Louis Pasteur University in Strasbourg in 1975). Following his postdoctoral fellowship at Cambridge University in the laboratory of Lord Jack Lewis, he worked at DuPont in Wilmington a few years before joining the Massachusetts Institute of Technology (MIT, USA) in 1975, where he became a professor in 1980. He has been a member of the National Academy of Sciences since 1983, the American Academy of Arts and Sciences since 1984, and many other institutions. In 2005, he received the Nobel Prize in Chemistry with Robert H. Grubbs and Yves Chauvin for "the development of the metathesis method in organic synthesis".

Welcome to the University of Strasbourg !

All you need to know about university services, campus facilities, student life and events at the University of Strasbou ...