Over the course of several encounters and a "stroke" of destiny, Christian D. Muller, a pharmacology researcher at the Hubert Curien Multidisciplinary Institute (IPHC), has come to test the effects of hemp on cancer cells by cultivating them with a little known method. Member of the Francophone Union for Cannabinoids in Medicine (UFCM I Care), he will be present on 28 June 2019 at the international conference on pharmacological advances and therapeutic uses of cannabinoids. 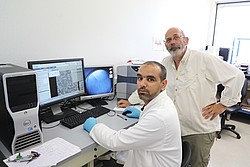 Where are we with the use of hemp in France?

We must already make the difference between therapeutic hemp and so-called recreational hemp, commonly known as cannabis. While the former is rich in cannabidiol (CBD) and is used as a painkiller, antispasmodic and anti-emetic, the second is enriched with tetrahydrocannabinol (THC) which is relaxing but does not cure in itself! Medicinal hemp is used successfully in people with multiple sclerosis as well as children with autism. It has the advantage of not engendering dependence unlike opioids. As far as legislation is concerned, it has been five years since the Senate authorised the marketing of a therapeutic hemp medicine. It is a painkiller, in the form of oral spray, known as SATIVEX. However the social security and pharmaceutical industry that created the drug cannot agree on the price to set. In other European countries, this type of product is already authorised as it is in Switzerland or Luxembourg.

How did you come to do your research on this subject?

It's a rather long story. My nephew was part of the UFCM I Care association as an advocate for the use of therapeutic hemp. He had lymphoma and took drops of CBD oil to relieve the side effects of his treatment and restore his appetite. After his death, I spontaneously replaced him in the association. From thread to needle, I met Christian Kelhetter, owner at the time of an alternative garden, Auxine, in Colmar. Following his readings in the field, he suggested that I test CBD oil on cancer cells in vitro. There are no studies in France on the subject, unlike other countries. In his garden centre, Christian Kelhetter sold horticultural LEDs produced by DELLED. The founder of DELLED, member of UFCM I Care since 2014, volunteered to fund our research. After an interview with the Ministry of Health's innovation delegation, the project focused on pancreatic cancer, one of the most aggressive and deadly cancers ever.

Can you tell more about your research?

We are currently testing CBD and medicinal hemp extracts enriched with CBD on this cancer. Following a meeting with a Sardinian veterinarian at a European congress several years ago, I reported an original cell culture method. He used "liquid pearls" to perform in vitro fertilisations on horses because they fuse together very easily. Instead of using "flat biology" (see box), we use this 3D culture technique, in order to touch the cancer stem cells protected inside these nodules without going through an animal model. For now, our first results are very encouraging and remain to be published.

The "flat biology" used for several decades in the search for new anti-cancer molecules, is a technique where cells grow flat. This culture does not reflect what is happening at the level of cancer metastasis.

For example, in 2D, there is 20% oxygen available on the surface of cell cultures whereas in the human body oxygen is rare and it is hemoglobin that must convey it. The oxidation of the molecules tested could partly explain the differences in results obtained in vitro and in vivo.

The 3D cell culture method is a more representative model of cancerous tumours. The cells in their culture medium are deposited on polymer particles, a sort of breadcrumb that allows the formation of "liquid beads" within which organoids containing cancer stem cells (CSC) will develop. The removal of CSC is one of the sources of remission.