Physicist and chemist Thomas Ebbesen, professor at the University of Strasbourg, has just received the CNRS gold medal. To celebrate this prestigious scientific award, the former director of the Institute of supramolecular science and engineering gathered his team and some collaborators and friends for a drink at noon on Wednesday 3 July 2019. 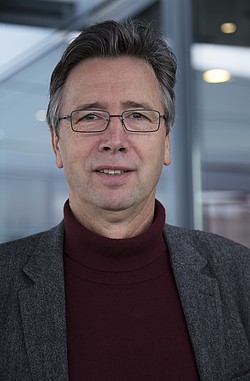 "I'm really overwhelmed, it's like an acknowledgement by the French system," says Thomas Ebbesen, Franco-Norwegian researcher, during a small improvised speech on the sixth floor of the Institute of Science and Supramolecular Engineering . The news actually landed officially on the CNRS website half an hour earlier: the researcher has just won the CNRS gold medal, one of the most prestigious scientific awards in France.

"It was very secret, some people invited this afternoon thought it was because I had become a grandfather, that I had received a prize from the Japanese government or some such! Some even thought that I was appointed to the European Commission", jokes the researcher, glass of champagne in hand, who wishes to thank all his team for this distinction that he did not expect, and the fruit of forty years of team work.

Michel Deneken, president of the University of Strasbourg, did not fail to recall that this distinction fell on St. Thomas' Day. Jean-Marie Lehn added a touch of humour by pointing out the lack of pretzels on the buffet. To remedy this, the 1987 Nobel Prize in Chemistry offered Thomas Ebbesen a photo of a gold pretzel and a real pretzel.

"Excellence and intelligence are now rewarded," continues Michel Deneken, noting that Thomas Ebbesen is not only a genius scientist but also a kind-hearted man, willing to support younger generations in research. So when will it be the Nobel Prize? "I will not answer that question," smiles Thomas Ebbesen, who likes discretion.

Thomas Ebbesen's research at a glance