As a wave of solidarity towards refugees is spreading across Europe, the University of Strasbourg is taking part in the efforts of the city of Strasbourg by helping student refugees get back into further education.

Kinan Alzouhir, a voice between France and Syria 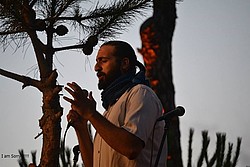 This young Syrian opera singer came to Strasbourg in October 2015 to perform at Sacré Journées, a local festival of interreligious music. He still hasn’t gone back to Syria. While waiting to obtain his refugee status, he tells us about his torn feelings regarding French and Syria and his unbreakable love of music.

In late March, Kinan Alzouhir sang a traditional Syrian song at the welcome event for refugees organised by the University of Strasbourg. A few months earlier, he performed at the cathedral for the opening of the Sacrées Journées festival. “I actually sang in all the churches of Strasbourg”, he adds with a touch of pride and a shy smile. Kinan was invited to sing in Strasbourg by his brother Karam who lives here and organised the festival. He arrived in Alsace in October along with his 20 colleagues of the St Ignatius choir. It wasn’t a trouble-free trip, as the choir members’ visas were refused by the French embassy in Lebanon; the French Minister of the Interior Bernard Cazeneuve had to unblock the situation.

At the time, Kinan was studying at the Higher Institute of Music in Damascus and planned to go home after the festival. 8 month later, he still is in Strasbourg, where he follows classes at the International Institute of French Studies (IIEF) and is well integrated in the local Protestant community. He lives in a university residence, where he met his girlfriend Charlotte who studies medicine. His uncle, a professor who has been living here for a long time, took him around Alsace in his camper van.

Although Kinan said he did not want to become a refugee when he arrived in France, he is currently waiting to obtain his refugee status. The hardships of war added to the fear of being enlisted in the army made him change his mind. The situation in Syria also made it difficult of him to practice music: on some days, it could take him between one and two hours to go to his rehearsals, getting past checkpoints and trying to avoid shells, car or bike bombs. All his professors progressively left Syria. Kinan remembers the good times before the war: he first learned to play the Oud, then played basketball and went to law school before finding his vocation when one of his teachers told him he had the voice to become an opera singer.

"If I could, I would sing all the time"

When he talks about his country, Kinan’s expression darkens. The tattoo on his arm is incomplete: the tattoo artist died before he could finish it. His friends and acquaintances either fled the country or died. On his phone, out of 500 contacts, only 140 are still alive. “At first, when you learn that a friend has died, you cry. Then, as more and more people die, you don’t cry anymore". He painfully remembers children playing war in the streets of Damascus, dreaming to become jihadists. “As soon as the war ends, I’m going back home”, he asserts, well-decided to be a role model in his country where he was well-known as a children choir director before the conflict.

He also bitterly points out the difference between the way he is welcomed in France as a protestant opera singer – a discipline part of European culture – and the way Muslim Syrian refugees are treated. He still hopes to make a career out of music. He launched the idea of singing to raise funds for fellow refugee students at the IIEF: “If I could, I would sing all the time”. His brother had to prevent him from doing so…at the prefecture!

Kinan and Karam’s parents are still in Syria. Their father, an Edith Piaf and Pavarotti fan – and bicycle repairer- passed his love of music on to them. Karam, who plays the viola, left the country in 2011 and completed a Master’s in musicology at the University of Strasbourg in June 2015. Today, Kinan keeps working on his repertoire (Arabic, Byzantine, Syrian, Orthodox or German songs, opera…) while waiting for the decision of the French Office for Immigration and Integration. Meanwhile, Charlotte takes care of his French: “If he doesn’t make progress, he will have to follow my vegetarian diet”, she jokes. His project for the summer is to go to the sea, which he hasn’t seen for five years.

17 May 2016 : The University takes further action for refugee students

The University of Strasbourg decided to take further action to help refugee students from the Near and Middle-East pursuing higher education in the forthcoming academic year.

Eligible students registering at University in 2016-17 will be exempted from tuition fees. The plan also provides students with French proficiency below C1 to enrol in a DU (University Diploma) in FLE (French as a Foreign Language) or in a B2-level DELF (Elementary Diploma of French). Other students can enrol in any degree programme at the University of Strasbourg on the condition that they meet the programme's requirement.

To be eligible for one of these options, students must meet the three following criteria:

Priority will be given to people who arrived recently. Considering the number of applications received in the past month, the University established a commission in charge of selecting applications according to the number of places available, the student’s career plan and his motivation.

Applicants have to pre-register at the International University House before 31 May (etudiantsrefugies@unistra.fr) 2016.
People meeting requirements will be invited for an interview within the month of June. They will be advised of the University’s decision no later than the first two weeks of July. 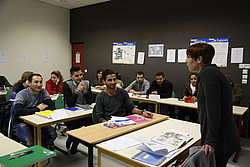 Since early November, over 20 refugee students are attending a French as a foreign language course at the International Institute for French Studies (IIEF) within the framework of an intensive language programme (17 hours a week). According to their teacher Elodie Duval, the group is very motivated. Upon completion of the course, they will be awarded a university diploma which will allow them to pursue their higher education.

Along with Paris I, Strasbourg is one of the only French universities to offer intensive language programme to refugees. Refugee students are coming from Montpellier, Le Mans, Toulouse or Paris to attend these courses. Thirty-five students are already on a waiting list and requests keep coming from all across the country. Another dedicated course might open in the second semester, depending on the funds the University will be able to gather for it. To help with this process, the University Foundation launched a call for donation earlier this week.

To donate, please fill out the following online form: http://campagne.unistra.fr/etudiants-syriens

14 October 2015: Registration of refugee students at the University of Strasbourg 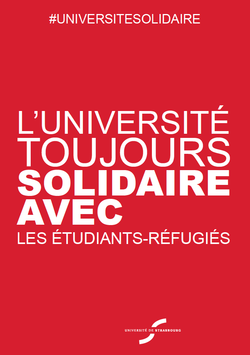 Refugee students wishing to enrol in a study programme or attend a French course are eligible to register at Unistra. The University will provide them with support and assistance throughout the process.

Since January 2015, the University of Strasbourg has been organising the orientation and the registration of refugee students arriving in France, especially students from Syria and Iraq.

Upon request, registration fees for these students can be waived. Contact the Direction des Études et de la Scolarité to request fee exemption (recham@unistra.fr). Students must register in their chosen program as per the required procedure (www.en.unistra.fr).

In addition, the University of Strasbourg has set up a special reception desk for these students, in order to answer all questions concerning university life and access to social services (03 68 85 62 27 – svu@unistra.fr).  This desk is located on the Esplanade campus on the ground level of the Platane building (allée Capitant).

-          Students with at least a B1 level in French: registration in the programme of their choice (the registration process takes place at the faculty that delivers the degree), with the possibility of registering for French as a foreign language courses (FLE) – (contact : Mme Tettamanti, see above).

The University of Strasbourg is committing to provide support to young refugees hosted in Strasbourg who wish to pursue their studies at the University, within the human and logistic resources available.

A coordination unit was set up on September 11th, under the supervision of Vice President in charge of Social Sciences Mathieu Schneider. This unit aims to provide assistance to student refugees and facilitate procedures in the following areas:

In the past, the University has already proved its commitment regarding societal and human issues, alongside political and social stakeholders: it has stood in solidarity with the victims of earthquakes in Haïti and Aquila, as well as with Syrian students who fought for their residence permits to be delivered by the prefecture. Unistra has also put itself lined up firmly with sociologist Pinar Selek and recently hired her as a postdoc to provide her research with an academic framework.

Similarly, as the city of Strasbourg takes their families in, the University will help student refugees to pursue higher education, which is a step towards their integration to the local community.

Despite the commitment of the entire university community to maintaining face-to-face teaching from the beginning of the ...