Summer 2016: the Campus Park in bloom

This year's very wet Spring had at least one positive outcome: the 10 000 flowers planted in the University park growned and blossomed, offering a delightful setting to students, researchers, lecturers and university staff. Non-academic guests also enjoy the park: bees, ducks, and even hawks nesting at the top of the Chemistry Tower. 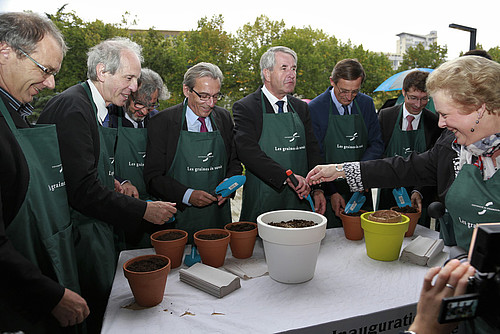 Students were pleased to discover the new campus park as they returned from the summer break. The new facilities include 2600 m² of flowery lawn, pedestrian walkways, 260 chairs, tables and benches, 980 bike racks. Outdoor Wi-Fi access points allow students and staff to connect to the University network from all over campus. The lawn has been sowed on the sports field and will grow soon.

A low-consumption lighting system has also been installed and may surprise evening walkers with its colour beams, moon projections and various lighting effects which will vary according to the seasons.

Before and after: the campus transformation 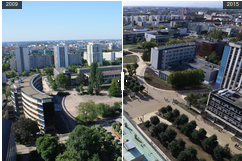 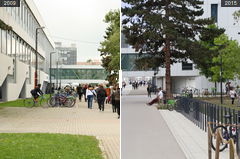 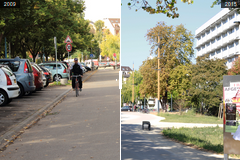 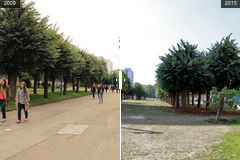 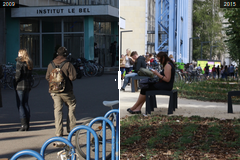 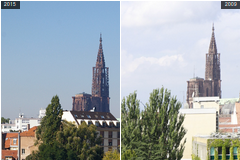 The Central Campus is currently undergoing major transformation within the framework of the campus development programme Operation Campus, which aims to refurbish buildings and implement new green spaces. After two years of work, the new campus park will be inaugurated on 17 September.

In the 1960s, the architect Charles-Gustave Stoskopf and town-planner Roger Hummel designed the campus as a set of modern buildings surrounding a large central park, but the latter was never built. It is now done after two years of work. The landscaping started in September 2013. Landscapers have teamed with designers, architects and engineers to create a greener, more attractive and more modern campus which opens out onto the city.

Practical aspects and special needs of the campus users were taken into account. Several cycle paths and bike racks have been put in. Steps have been removed as much as possible to facilitate access for people with disabilities. Biodiversity is also at the core of the project: 290 trees have been planted, which makes a total of 610 trees on the campus.

Several buildings from the 1960s are also being refurbished, such as the Faculty of Law and the Chemistry Tower, or the Paul Appell university halls of residence. New buildings will also be built, among which the Learning Centre - Maison de l’Étudiant, which will provide students with a wide range of services, and host various events throughout the year.

Despite the commitment of the entire university community to maintaining face-to-face teaching from the beginning of the ...