The European Credit Transfer System (ECTS) is a grading system developed by the European Union that attests to students’ higher education level and facilitates the recognition of qualifications within the European area.

The accumulation of credits depends on the following criteria:

One year of full-time study corresponds to 60 credits ( 30 credits per semester): 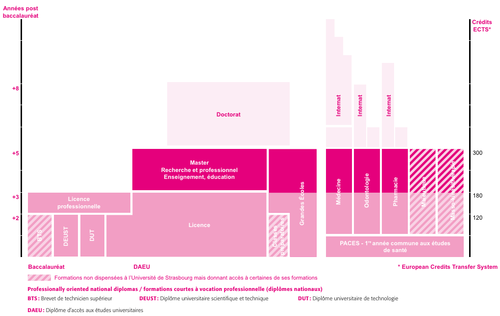 French university studies are organised around three national degrees: Licence, Master and Doctorat. Like the ECTS, the LMD system has been developed and standardised in most EU countries.

However, there is no automatic equivalence between French and foreign degrees, as each higher education institution can define its own admission criteria.

Licences, like Bachelor's degrees, are 3-years programmes (6 semesters) that can be entered after completing secondary education.

French Master's degrees are completed in 2 years: Master 1 and Master 2.

A doctorate is completed after 8 years/ 16 semesters of study.

There are two main types of classes in French higher education (mostly in universities).

Lectures take place in lecture halls with a capacity of 100 to 1000 people and consist in an oral presentation by a university teacher during which students take notes.

TD and TP are small-group courses that provide students with a practical approach of the theoretical knowledge acquired during lectures. Seminars, contrary to lectures, are compulsory.

In France, the academic year runs from September/October to May/June according to the faculty or school and to the different courses of study.

The year is divided into two semesters separated by a two-weeks holiday during the Christmas and New Year period. Three more weeks of vacation are distributed over the academic term.

Summer holidays last a little more than two months and always cover the months of July and August.

Get the latest information on the situation at the university during the coronavirus outbreak.